Cheered on by an enthusiastic crowd, Hannes Arch of Austria rallied from behind to upset Red Bull Air
Race World Championship leader Paul Bonhomme of Britain. 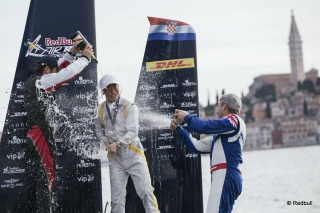 ROVINJ (Croatia) – Austria’s Hannes Arch came from behind to beat defending champion Paul Bonhomme in a riveting final in the second stop of the eight-leg Red Bull Air Race World Championship on Sunday in Rovinj, Croatia. Arch was trailing Bonhomme at the midway point of the final round by 0.23 seconds but opened the throttle with a blistering second lap on the obstacle course set up on the Adriatic Sea to get his eighth career victory. Japan’s Yoshihide Muroya got the first podium of his career, taking third place on a challenging course in the bay off Rovinj that was made even more difficult when the winds coming from the south shifted to from the west.
Cheered on by thousands of fans from nearby Austria, Arch also became the sentimental favorite of the local Croatian fans, who were savoring the country’s first Red Bull Air Race. The Austrian had a flawless run in the final, stopping the clock in 59.012 seconds — ahead of Bonhomme’s 59.097. They have 21 points each in the World Championship standings.
“It’s really special,” said Arch, who felt lifted by a surge of support this weekend from the big crowd in Rovinj, a stunning town on a peninsula known as the blue pearl of the Adriatic. “When I heard I was first I had tears in my eyes because of all the emotions and the release of the pressure. It was so difficult here.”
There was a record six pylon hits on the challenging course set up in the water just off the shoreline of Rovinj – including one in the Super 8 round that ended the day of Matt Hall of Australia, who finished a disappointing seventh. Canada’s Pete McLeod was fourth after a costly penalty in the finals. Britain`s Nigel Lamb got knocked out when his running propeller touched the ground and got damaged at the Race Airport.

This website uses cookies to improve your experience while you navigate through the website. Out of these, the cookies that are categorized as necessary are stored on your browser as they are essential for the working of basic functionalities of the website. We also use third-party cookies that help us analyze and understand how you use this website. These cookies will be stored in your browser only with your consent. You also have the option to opt-out of these cookies. But opting out of some of these cookies may affect your browsing experience.
Necessary immer aktiv
Necessary cookies are absolutely essential for the website to function properly. This category only includes cookies that ensures basic functionalities and security features of the website. These cookies do not store any personal information.
Non-necessary
Any cookies that may not be particularly necessary for the website to function and is used specifically to collect user personal data via analytics, ads, other embedded contents are termed as non-necessary cookies. It is mandatory to procure user consent prior to running these cookies on your website.
SPEICHERN & AKZEPTIEREN